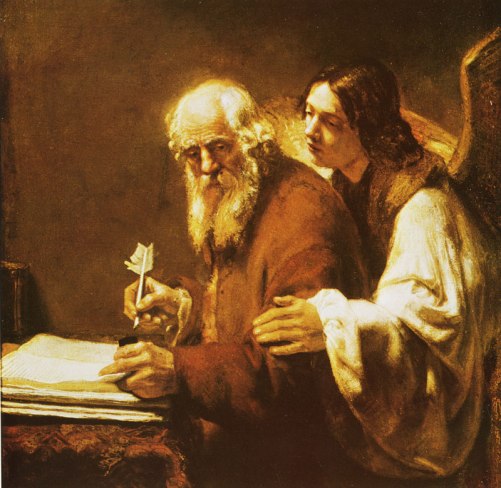 As we know, Matthew was one of the twelve disciples of Jesus. I like how he is called, it is dramatic on film, Jesus sees him at his tax collection table and says ” Follow me. ” Just like he did to the the others who were fisherman, for the most part.

Tax collecting was not the best way to make a living, the Romans would increase taxes and many of them were a sordid bunch, like the money changers and those who sold offerings. The other tax collector we hear of is Zacchaeus, who climbed a sycamore to see Jesus and repaid those he had stolen from.

Though no mention is made of Matthew’s credibility, Jesus saw something in him or rather he in Jesus, if only two words can make you follow a man, become a disciple, and be empowered by Him. The Gospel according to Matthew gives the genealogy of Jesus and the first years of His life and also His ministry and crucifixion.

The movie, the Matthew series with Bruce Marciano, is told by Matthew as he writes his book. His performance as Jesus is one that I was take with, He made Jesus so real and personable to me. Matthew may have had an angel over his shoulder he recalled the time spent with Christ.

It was written around 70 to 80 A.D. after the temples was destroyed. Though some question Matthew as the author and even say some was copied from or mingled with Mark. I have no reason to believe it was simply not the tax collector who received a higher calling and wrote the book.

No doubt, this was an angel of provision, who along with the Holy Spirit, prompted him to remember his time with Christ.

I'm a Christian writer and I love music and art. I am hoping to encourage everyone to follow their dreams and trust Jesus, keeping with the theme of teaching women to rest and receive His peace. He gets the glory! View all posts by adaughtersgiftoflove

This site uses Akismet to reduce spam. Learn how your comment data is processed.